SONIC and NU-Delta members presented at the INGRoup conference on July 14-16 in Helsinki, Finland.

Abstracts for posters and presentations are listed below the schedule. 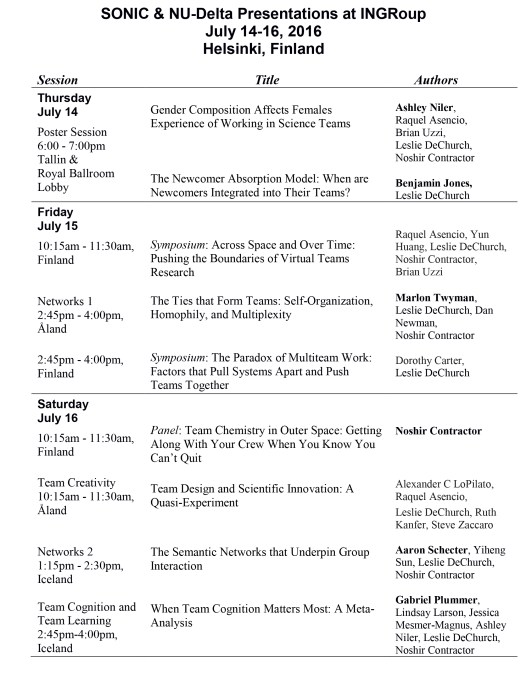 Success in scientific fields hinges on effective collaboration. Whereas females excel in communal settings, they are underrepresented in scientific fields, and on science teams. We find the percentage of females on a team affects females’ level of team identification and collective efficacy, and subsequently team performance.

The Newcomer Absorption Model: When are Newcomers Integrated into Their Teams?

Symposium: Across Space and Over Time: Pushing the Boundaries of Virtual Teams Research

Globalization and advancements in communication technology have encouraged the use of virtual teams; however, our knowledge of the dynamics and the implications of working across geographic, organizational, and time boundaries remains limited. Our symposium pushes the boundaries of research on virtual teams by exploring new topics and utilizing different methods.

The Ties that Form Teams: Self-Organization, Homophily, and Multiplexity

This paper explains the unfolding process of team assembly – the behaviors involved as individuals consider and form relationships with potential teammates. We explore the role of self-organizing principles, homophily, and multiplexity in explaining how individuals choose their collaborators. Findings reveal multiplexity is a stronger predictor of team assembly than homophily.

Symposium: The Paradox of Multiteam Work: Factors that Pull Systems Apart and Push Teams Together

Multiteam systems present a paradox of building strong component teams that function effectively as a larger system. This symposium examines factors pulling these systems apart and pushing component teams together. The papers take important next steps in advancing MTS research to new levels of theoretical precision and into new contexts.

Panel: Team Chemistry in Outer Space: Getting Along With Your Crew When You Know You Can’t Quit

One of the riskiest group projects in history is being planned – a manned trip to Mars. This panel focuses on the composition of teams selected for long-duration space missions. It will consider what groups research across multiple disciplines can tell us about high performing teams in space missions

There are two important realities of innovation, and together, they present a formidable paradox: innovation happens in teams, and various flavors of diversity have been shown to hinder team functioning. We manipulate team design to compare integration and innovation in two structures: a cross-functional team and an interdisciplinary multiteam system.

When Team Cognition Matters Most: A Meta-Analysis

We uncover the operating conditions under which cognition is most critical to team success. Five key factors affect the instrumentality of team cognition to team affect, behavioral process, performance, and viability. These factors can be categorized as: team identity reinforcers, team stressors, team motivators, team sociomateriality, and team external embeddedness.